Yes, you heard that right. We're here to talk about something so common you just wouldn't believe it.

Garage door opener outages. Believe it or not, after big storms (like the one that came through yesterday in Spartanburg and the whole surrounding area) we often get calls from customers complaining that their garage door opener won't open.

This can be due to either a power outage--which is a simple fix--just pull the red string on your garage door opener as seen in the video below:

Once your power is back on, you can reconnect the opener and voila! Your opener should be functioning normally again. Keep this trick handy and it will save you time and money and a little peace of mind.

If your garage door won't go up after you pull the red string, this could indicate a broken spring. The door will be extremely heavy and you probably wouldn't be able to lift the door manually with a broken spring. In this instance, it's best to call an expert! You know a guy, right? (cough cough) 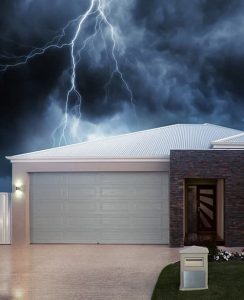 The second most common issue we get calls about after a bad thunderstorm or lightning storm is when the customer has power, but the garage door opener is not responding. This could indicate a bad circuit board.

Thunderstorms, with their dramatic lightning strikes, can be as damaging as they are impressive. The electricity discharged by a lightning strike can start a fire and fry any number of electrical objects in a house. The power will surge from the ground through water and into electrical wiring. A direct hit is not necessary for a lightning strike to damage household equipment.

Signs to look for after a storm:

If you suspect that your garage door opener may have been affected by a thunderstorm or lightning, give us a call. Circuit boards can run about $100 per board, which is not cheap! But it's less expensive than replacing the entire unit.

Customer service was great...
Read Reviews
Service &
Repair Residential
Garage Doors Door
Openers Commercial
Doors
Whether you’re looking to boost the curb appeal of your home with a new door or need emergency door repair, you can count on our team of experts to provide prompt, friendly, and affordable service. Let’s get started.
Serving the Upstate Region of South
Carolina Since 2007. We provide fast and reliable
service when you need us, 24/7. View MAP
Links
Design My Door Explore Gallery Read FAQ
Connect With Us